Welcome to the page for Willow Brook Chess Club.

I’m sure many of you are missing your weekly chess club, but have no fear – an online solution has been found! I’m currently in the process of getting this up and running.

In the meantime, the people at Chess in Schools and Communities (they help organise our tournaments) have created some weekly lessons to help keep you busy. I think for some of you the first few lessons are a bit easy, but the later ones are really good. There are also fun problems to solve. Maybe the coronavirus is an excellent excuse to get really good at chess?!

Follow this link to find videos, worksheets and quizzes.

I’ve also been on the lookout for a simple explanation of chess notation. It’s the special language that we use to write down chess moves. You will have seem myself and Miss Brearey writing the moves down in this way in our game against Dr. O.  I couldn’t find a good explanation for you online, so I wrote my own. I have tried to make it as simple as possible. See below.

Here is how the chessboard squares are labelled. Just like when you read a graph, you start in the bottom left corner. 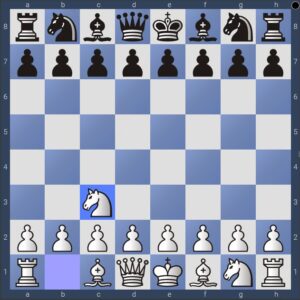 So the white queen starts on d1. But this is written d1 NOT D1. Can you see the difference? The squares use lower case letters. The black king is on e8.

There are many different ways of writing down chess moves, they are called chess notation. We are going to use the easiest way, it’s called algebraic notation.

Each piece has a letter. The first thing you write is the letter of the piece that you are moving.

So if we wanted to write down the move of this knight, we would first write N (for knight). Then we would write c3 (which is the square the knight moved to). This looks like

Now the important thing to remember is that you always start with white’s move. White’s first move would be written after the number one and a full stop. Then there is a space and then you write Black’s first move. You can see that Black moved their knight as well. 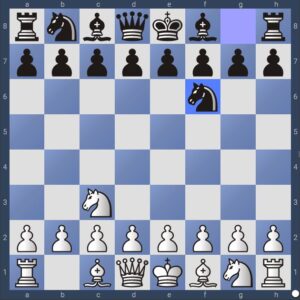 So you can see that white’s move comes first, and then there is a space and black’s move comes next. They are both part of the first move, that’s why you can only see the number 1 with a full stop. 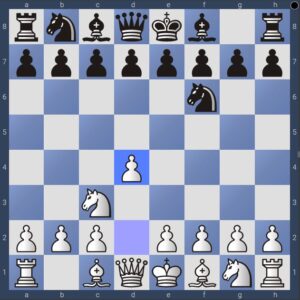 The second move for white is written underneath the other two moves and after the number two and a full stop.

You’ll see that white moved their pawn, so there is no need for a capital letter.

And black replies with their second knight. 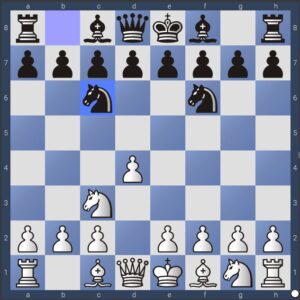 There are some more complicated rules for notation, but if you’ve read this far then I think you’ll be able to work it out for yourself. If you have any questions then don’t hesitate to send me an E-mail!