The Beagle has now crossed the Indian Ocean, and has stopped at Mauritius. The Beagle has anchored at Port Louis on the western coast. I used the opportunity to explore the geology of the island, as usual. I took an excursion south of Port Louis to Le Pouce – the third highest mountain on the island.

The next day I ascended Le Pouce, a mountain so called from a thumb-like projection, which rises close behind the town to a height of 2600 ft. The centre of the island consists 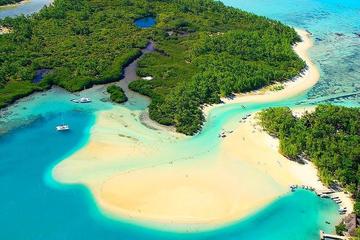 of a great platform, surrounded by old broken basaltic mountains, with their strata dipping seawards. The central platform, formed of comparatively recent streams of lava, is of an oval shape, thirteen geographical miles across, in the line of its shorter axis. The exterior bounding mountains come into that class of structures called Craters of Elevation,which are supposed to have been formed not like ordinary Craters, but by a great and sudden upheaval.

The Surveyor General of Mauritius invited me to stay at his country house and took me to see some of the island’s geological features.